Do you ever ask yourself “Why do I even get up in the morning?” If so, first go see a therapist. Second, think about all the good things there are to look forward to every year. Family, traveling, the holidays, and for some, like myself, Lexington Burger Week.

Lexington Burger week gives local and chain restaurants in the Lexington area the opportunity to showcase their burgerific talents and show what they’re made of. For $6 each you can sample the best burgers Lexington, KY has to offer. That’s exactly what I did.

My goal was to find the absolute best burger in the city. To accomplish this I decided to visit the Lexington Burger Week Website (www.lexingtonburgerweek.com), find the best looking burgers on the page, and try 10 of them within the span of 5 days. Pretty simple, right? I took detailed notes on each burger and analyzed every aspect of these beefy beauties. After much deliberation and analysis, I have what I believe to be the definitive rankings for burgers during Lexington Burger Week.

So, without further ado, here are my rankings from worst to best in the ten burgers I sampled.

My Honest Take: Talk about disappointment. Harry’s and the Malones BHG group have a reputation for producing top quality steaks among other meaty entries. This one was very forgettable.Although the burger was cooked nicely, the flavors were bland, the texture of the toppings was lacking, and it was just a salty mess of a sandwich. This coming from a salt fan. I was very disappointed in this one. Maybe the bar was set too high. If I were Harry’s, I would take this off the menu for next year. It just didn’t work. C’mon Man!

My Honest Take: When you bite into a beef burger the first thought shouldn’t be “did they accidentally give me a turkey sandwich?” I literally did a double take on this one. Let me say this. I think this place probably makes some really good homestyle food. The smell of the restaurant was amazing and reminded me of home. However, I don’t think that Lexington Burger Week was the way to showcase their skills. I couldn’t even taste the beef. The turkey was the only meat flavor I could find. It tasted like Thanksgiving dinner on a bun. That may sound like a good idea on the surface, but trust me, it just doesn’t work.

8. The BLT Burger from Harry’s American Grill – The “Is This the Best You Can Do?” Award

My Honest Take: I hate to beat a dead horse, but Harry’s, you’ve gotta step it up. The burger was cooked very well. The flavor of the beef itself, like the Korean Burger, was good. However, it is topped with an oily mess for toppings. I love bacon just as much as the next guy and it was very good. The problem was the bacon grease mixed with the garlic mayo and iceberg slaw. It was messy and oily and not in a good way. I also didn’t get any heat or flavor from the jalapeños. Overall, it was just an average burger.

My Honest Take: This one was very straight forward. No frills. Nothing that really stood out. The good news is there weren’t a lot of negatives. The bad news is there weren’t a lot of positives either. Gorgonzola added a nice creamy texture. The jam was a nice combo of sweet and savory. Just a solid burger that would be nice to eat when you stop by Zim’s in Downtown Lexington.

My Honest Take: First off, extra points for putting an American flag in the burger. Nice touch. This burger was delicious. It was very juicy and was just spicy enough to eat comfortably while enjoying a little heat from the jalapeños. The guacamole was fresh and it showed. The sriracha aioli was one of the best sauces of the week. One weird part was I found the burger was somewhat “slippery.” The toppings created this weird interaction with the bun where the top bun kept trying to slide off. It made it a little difficult to hold on to. Overall, a very good experience at Ted’s Montana Grill.

5. The Easy Rider Burger from Agave & Rye – The “This is a Mexican Restaurant?” Award

My Honest Take: The tobacco onions were delicious and less salty than the standard onion straws that get stacked on many different burgers these days. The agave and chili bbq jam was sweet, but it somehow didn’t overpower the whole burger despite having such a distinct favor.The bacon and queso worked well together, and I could taste each of them individually. I was initially worried the queso would overpower everything. That was not the case. I am a fan of Agave and Rye for their tacos. I was pleasantly surprised to see that they could also compete in the burger world. Impressed.

4. The Beerfest Burger from Drake’s – The “Redemption” Award

My Honest Take: Okay. So, the BHG group has disappointed me up to this point with the Korean Burger and the BLT Burger. With that being said, this burger is a real powerhouse. It was the first burger I had during Lexington Burger Week, and it really set the stage for what was to come. The beef itself was cooked beautifully. Very juicy. The beer cheese was much better than average and had such great flavor. It also provided a creaminess to the whole burger which made it into a burger I didn’t want to put down. The combo of mustard, pickles, and horseradish really gave it a nice tang to pair with the savory beer cheese. I hope it’s on their Burger Week menu next year.  It was some redemption for BHG after the first two of their burgers mentioned on this list.

3. The F2020 Burger from Stella’s Kentucky Deli – The “Innovation” Award

Description: To help us forget the nightmare that has been this year, enjoy a perfectly cooked Kentucky beef burger topped with pulled pork, house made beer cheese, molasses BBQ, pickles and crunchy Grippos.

My Honest Take: Man, just when I thought these burger joints couldn’t get more innovative, Stella’s comes out and throws Grippo BBQ chips on their burger. Freakin’ chips! As a Grippo’s chip fan this made my day. For any fans of these chips, you are probably well aware that they carry a very strong BBQ favor. However, it didn’t interfere with the rest of the burger. The beer cheese was probably the second best I had all week. The burger was thick, juicy, and cooked to perfection. There was just a touch of pulled pork which was nice. This allowed the flavor of the burger to really shine through and not be overpowered with another meat like I saw with the Southern Love burger mentioned earlier. The only downside was I did not really get the molasses taste at all. All in all, this was a great experience. I hope they participate in this event next year.

My Honest Take: This burger piqued my interest solely based on the picture. There are a lot of toppings on here. Those toppings all have very, and I do mean very, distinctive flavors. You’ve got ginger beer, bacon, jam, smoked blackberries, agave, bbq, cheddar, and fried onions. How could all of this work together? Hell, I don’t know, but somehow it did. Every single ingredient in this burger was able to shine on it’s own yet come together to make a great burger experience. The smoked blackberry agave bbq had this unique combination of smoky, sweet, and tart that I haven’t really had in a burger. The jam was probably the best on any burger I had this week. The little bits of bacon in it really made for a nice texture. Extra points for cooking and serving these outside on their grill. This was a joy to eat. Congrats to Ranada’s!

My Honest Take: Is it weird for a grown man to cry when typing a story about a burger? No, really, I’m asking. I have eaten a lot of burgers in my 38 years. I have the dad bod to prove it. The Tipsy Thyme Burger is easily one of the best burgers I have ever had. The photo itself looks very unassuming. When I pulled into the parking lot of Wild Thyme I was overwhelmed with the smell, and the line of people, coming from their outdoor grill. There was a reason for the line. First, the burger was cooked perfectly and was sooooo juicy. The hamburger patties were handmade, and it showed. It gave it a nice “home cooked” feel. The savory beer cheese (the best of the week) mixed with the sweetness of the jam with just a dash of tang from the pickle just melted in my mouth. It was like someone had discovered the perfect pieces to a burger puzzle and put them together in this burger. Every piece just fit. The chipotle tipsy sauce topped everything off and brought a great texture to every bite.  The biggest reason this burger wins? The taste of the beef patty itself was highlighted on this burger more than many other one I tried all week. It’s almost like the burger patty called shotgun for the front seat, but left enough room for his best buds to go on the ride with him. And what a smooth ride it was.

Congratulations to Wild Thyme. The award we will bestow to you will be very similar to the award we handed out last year. Just in different color. I’m kidding. We don’t really have an award, but what you do get is our respect as the King of Lexington Burger Week!

Stay tuned for our coverage of Lexington Pizza Week coming November 16-22! Let us know which pizzas on this list deserve a shot. We’ll see you there!  www.lexingtonpizzaweek.net. 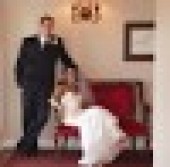 Brandon was born and raised in Whitesburg, KY. As an avid Kentucky Wildcat fan from early childhood, he had visions of tying up the old shoe laces for Rick Pitino and Tubby Smith. Unfortunately, that didn’t work out. Brandon graduated from the University of Kentucky where he received his MBA. He is married to his high school sweetheart and they have two sons. He enjoys every minute of life, especially those days when UK is playing. Brandon is a registered independent and likes to play devil’s advocate on just about any issue - just for the heck of it.

MS: Rich, we’re gonna have to let you go. But we’re giving you an iPhone so that you can always keep in touch.

RS: Thanks, Mark, but uh, the screen is broken.

RS: No, the screen doesn’t work.

Take all my money for Duke playing at Rupp